Rising sea levels will pose a serious threat to human civilization by inundating not only large expanses of arable land but also some of the world’s largest cities.

About 85% of the vulnerable people are living in East or South Asia. "China contains the largest affected population, followed by Bangladesh, India, Vietnam, Indonesia and Thailand" (Source).

"The worst case scenario, for instance, shows that nine percent of the world’s population lives in areas that could face annual flooding by 2100. But in a scenario in which emissions are sharply reduced, that figure 'might be cut in half”' (Source).

Unfortunately, experts predict that because of the effects of climate change, there could be over 1 billion refugees by 2070 (Source).

The melting of glaciers in Greenland, as well as the melting ice sheets of Antarctica, are one of the main factors.

On the other hand, the melting ice caps in the North Pole are not contributing to the rising sea levels. This is because the ice floats on the Arctic Ocean. The fact that the ice is not as thick has nothing to do with why that ice does not add to rising sea levels. It is simply floating ice, like ice cubes in a glass.

It is the ice on land - glaciers and the ice sheets on Greenland and Antarctica - that add to sea-level rise, as well as thermal expansion of the seawater.

About 98% of Antarctica is permanently covered in ice (Source).

It is the planet’s highest, driest, windiest, coldest, and iciest continent (Source).

This cold continent contains roughly 90 percent of the world’s ice and contains 70% of the world's freshwater (Source).

This alone will cause many coastal areas to be inundated.

Antarctica "is gaining sea ice but Antarctica is losing land ice at an accelerating rate, which has implications for sea level rise" (Source).

The sea ice increase or decrease is not going to affect sea levels, similarly to how the melting of sea ice in the Arctic Ocean is not affecting sea levels. However, the land ice from Antarctica that melts will raise sea levels. 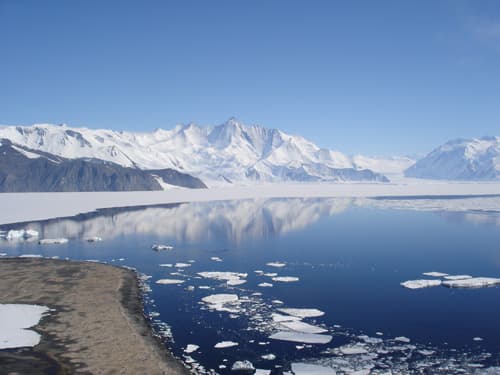 If all the ice from Greenland melted, it would raise sea levels by 20 feet (Source).

Sadly, the latest reports from scientists inform us that these glaciers are melting far faster than they had anticipated.

"The Greenland ice sheet’s losses have accelerated so fast since the 1990s it is now shedding more than seven times as much ice each year, according to 89 scientists who use satellites to study the area" (Source).

"The sheet’s total losses nearly doubled each decade, from 33 billion tons per year in the 1990s to an average now of 254 billion tons annually. Since 1992, nearly 4 trillion tons of Greenland ice have entered the ocean, the new analysis found, equivalent to roughly a centimeter of global sea-level rise" (Source).

"While a centimeter may not sound like much, that uptick is already affecting millions. 'Around the planet, just 1 centimeter of sea-level rise brings another 6 million people into seasonal, annual floods,' said Andrew Shepherd, a University of Leeds professor who co-led the massive collaboration with NASA researcher Erik Ivins (Source).

In addition to rising sea levels, this melting will also cause a change in weather patterns.

NASA's James Hansen, one of the world's leading climatologists, warns that "If the world allows a substantial fraction of the Greenland ice sheet to disintegrate, all hell breaks loose for eastern North America and Europe" (Source).

According to an article by Bill McKibben in 2012, there is no place that is changing faster than Greenland and there is no place where that change matters most. In that year, NASA reported that there was ice across all Greenland that was melting which was an event that hasn't occurred in at least 150 years (Source).

As temperatures increase, sea levels will rise directly because of a phenomenon known as thermal expansion.

Moreover, as more glaciers melt, less of the sun’s energy is reflected away from Earth, which will cause temperatures to rise even more.

This is known as a positive climate feedback loop. 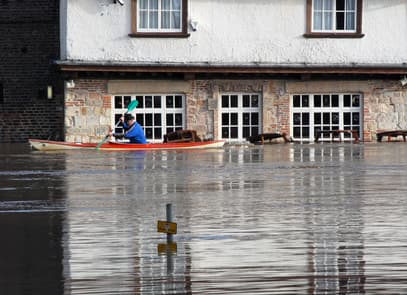 The sea level has risen by about 8 to 9 inches or 21 to 24 centimeters since 1880, and about a third of that increase happened in just the last two and a half decades. This sea-level rise is due to a combination of melting of glaciers and thermal expansion of water (Source).

According to Climate.gov, "In 2012, at the request of the U.S. Climate Change Science Program, NOAA scientists conducted a review of the research on global sea level rise projections. Their experts concluded that even with lowest possible greenhouse gas emission pathways, global mean sea level would rise at least 8 inches (0.2 meters) above 1992 levels by 2100. With high rates of emissions, sea level rise would be much higher, but was unlikely to exceed 6.6 feet higher than 1992 levels" (Source).

"Both the low-end and 'worst-case' possibilities were revised upward in 2017 following a review by the U.S. Interagency Sea Level Rise Taskforce. Based on their new scenarios, global sea level is very likely to rise at least 12 inches (0.3 meters) above 2000 levels by 2100 even on a low-emissions pathway. On future pathways with the highest greenhouse gas emissions, sea level rise could be as high as 8.2 feet (2.5 meters) above 2000 levels by 2100" (Source).

According to NASA in an article published in 2018, "If the rate of ocean rise continues to change at this pace, sea level will rise 26 inches (65 centimeters) by 2100 — enough to cause significant problems for coastal cities" (Source) 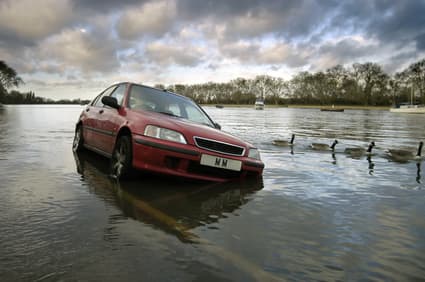 The slightest rise in sea levels will cause severe floods in low-lying coastal areas worldwide.

These floods will impact agriculture and contaminate freshwater sources with saltwater.

It should also be mentioned that the combination of rising sea levels, changes in weather patterns, and an increase in the severity of hurricanes and tropical storms would be absolutely devastating to coastal regions.

Currently, there are more environmental refugees around the world than both war and political refugees combined.

With rising sea levels, there will be millions more, which will have very strong social, political and economic effects.

Without a doubt, it is our moral duty to help stop climate change and to spread the word on humanity's greatest challenge.

If we don't, the effects of climate change will have a tremendous impact on human civilization.